United Passenger Told Massive Fuel Leak Was 'Normal': Not only did United botch the mechanical issue, but its customer service made things worse yet again. (Credit Travelpulse.com)

ARE YOU KIDDING ME.....AGAIN?!?!?!?  I will keep my United/Chase credit card, but since I now live in Las Vegas, Nevada, I can fly Southwest almost anywhere including Mexico.  Happy Landings!!
Posted by wicky at 6:26 PM No comments:

A Chicago institution since 1950.I am a pizza snob as I was born and raised in New Jersey with NJ and NY pizza.One cannot even compare NJ/NY to Chicago pizza whether Deep Dish, thin, or thick since they are in completely different categories. I learned this a few years ago and to compare would not be fair.  I ordered a 12 inch sausage and mushroom pie. Thin crust is GOOD and thank God it was not a cracker crust or cardboard with ketchup!!  The sauce was decent and the cheese was real. I enjoyed the "9 pieces of paper" measurement cut in small squares, not slices, apparently a Chicago thing. One MUST appreciate the fact that Pat's is a family owned institution in a setting that probably has not changed much since opening day. I love and appreciate restaurants like this! The variety of beers was well appreciated. 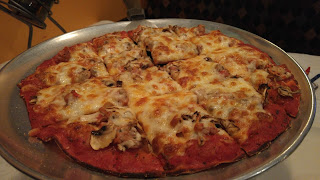 We all know that United Airlines has gone to hell since their not so easy merger has happened.
I really do not look forward to being a United customer, since I'm able to fly on Southwest at almost every chance. Enjoy this video from The Jimmy Kimmel Show on April 10, 2017.....It sums up United Airlines in 30 seconds...............

If you're planning a trip to Law Vegas anytime soon, you must be responsible to yourself and read up on parking fees at Strip hotels and be prepared to be ripped off if you need to park that rental car.
My advice is NOT to patronize these mega-hotels and check out other properties nearby. This is a poor business decision and a public relations disaster in my opinion as for the residents of Las Vegas.
Yes, real people live here too.  Read on, you will thank me later.

Less than a year after implementing parking fees at most of its properties, MGM Resorts  International will increase its rates next week, some by as much as 39 percent.
The company confirmed Tuesday that it would increase valet and self-parking rates at 12 properties beginning April 12. MGM will add a new tier for calculating self-parking rates. Instead of charging to park from one to four hours, the company will implement a rate for one to two hours and a higher rate for two to four hours.
The company will continue to allow free parking for up to an hour for people visiting for short errands or purchasing event tickets. The company’s Circus Circus property will continue to have free self-parking.

“We are adjusting the parking rates for a variety of business-related reasons,” said MGM spokeswoman Yvette Monet. “These adjustments are based on market analyses we have conducted since we implemented the program.”
The daily valet parking rate for MGM’s top-tier properties — Aria, Bellagio and Vdara — will climb from the current $18 for 24 hours to $25, a 39 percent increase.
MGM started the trend of paid parking at Strip properties when company officials announced in January 2016 their intent to begin charging customers later in the year. The company started charging people to park at properties near T-Mobile Arena in April when events started being scheduled at the state-of-the-art venue.
In June, gates, scanners and pay stations were installed in parking garages and guests began paying. Nevada residents caught a break through the end of December, getting to park free by scanning a barcode on their driver’s licenses to get free admission to garages.
But that ended Dec. 29 and now, everybody pays.
Customers can still park for free if they hold top-tier M life loyalty cards. Self-parking is free for holders of Pearl, Gold, Platinum and NOIR levels while valet parking is complimentary for the Gold, Platinum and NOIR levels.
The company also in December introduced a branded M life Mastercard through First National Bank of Omaha that enables free parking.
 
Other companies followed MGM’s paid parking lead. Today, guests of Caesars Entertainment properties pay to park, but Nevada residents can scan their licenses to get free access. The Cosmopolitan of Las Vegas also announced plans for paid parking and Wynn Las Vegas put a fee on valet parking, but not self-parking.
When MGM first announced its $90 million parking initiative, officials said the revenue generated by the parking fees would be dedicated to building a new $54 million, 3,000-space parking structure near the Excalibur,  close to T-Mobile Arena to add parking for arena events.
In addition, the company said it would invest $36 million in upgrades and enhancements to existing parking facilities. MGM’s current parking lots lack improvements available through technology, including space availability and way-finding systems.
Company officials declined to provide parking revenue figures and did not have an update on the company’s announced plans for an annual parking pass.
Contact Richard N. Velotta at rvelotta@reviewjournal.com or 702-477-3893. Follow @RickVelotta on Twitter.
New parking rates

No charge for the first hour at any property

Even though I considered retiring to Albuquerque at one point, it's a good thing I didn't. Aside from scenery, history and mostly good weather, there is nothing going on here AT ALL.  I would have made a horrible mistake and would have been bored to no end....plus housing is more expensive than Las Vegas.

After six months in Las Vegas, it's apparent I have made the right choice, have made many friends, and am saving saving a fortune on taxes and utilities. Since there are so many coupons, promos and "what not", one can live like a king. And What Not can be expensive!!
Good restaurants and extraordinary entertainment at every turn and this is without even going to The Strip!
This is coming from a person that had no reason AT ALL to come to Las Vegas 12 years or so ago.
I never dreamed of living here, let alone in very well planned area named Summerlin.
I'm here to stay.

Higher Interest & ATM Reimbursement Might Not Be Worth It

From an email I sent to a financial website:


Several months ago I opened an E-one Hybrid account with Salem 5 Direct, the internet side of Salem 5 Cent Bank in Massachusetts. I opened this as a secondary account for direct deposit, since I retired and work LYFT, part time along with Postmates....it has been a disaster, which I finally closed today. As a side note, I opened this after experimenting with a Aspiration account, which I closed after phantom deposits showed up in my account.
Also, Aspiration STILL does not have an mobile app, instead telling customers to use the Radius app, their parent bank. Odd.

Both banks offer no-fee and total reimbursement with atm's WORLDWIDE, just like Schwab, but with better interest; 1.10% at Salem5.
The straw, or dollar, that broke the camel's back was yesterday when I wired, for free, $1000.00 from Chase into my E-One account. I checked my Salem5 statement to see that they charged me fifteen dollars for an inbound transfer!  Building up to this was their arcane on-line, as well as telephone, security. Jumping through hoops and over barrels is an understatement, while negotiating the "innards" of their website is far from a streamlined experience.
I made sure to check if they would charge me to close my account and send me a real check. The answer was no.

It's interesting to see a bank operating in the 21st century, that created an internet side, still operates as if it's the Seventies.

I opened an account with Ally, again, a secondary account. Ally uses the Allpoint network as well as reimbursing out of network ATM's.
Allpoint is in Mexico now with "free" atm's, with the exception of a cross border fee and another fee, which amount to 1% more or less.
For the extra few cents (or pesos), I feel it's worth not having all the aggravation of Salem5.
From my "vast research", I have concluded that Ally Bank is the Southwest Airlines of banking!
Whew!

All hope is not lost about my I'll feelings toward United Airlines. I stupidly left a Chromebook in the seatback pouch exactly one month ago when I arrived at Puerto Vallarta. Goodbye Chromebook.
Today I received an email from United telling me they ACTUALLY FOUND IT!
They're holding it for $20 ransom, but I do get "miles" on it since I paid for the return on my United card. At least I can now fly to Mexico on Southwest now!!
Posted by wicky at 5:31 PM No comments: