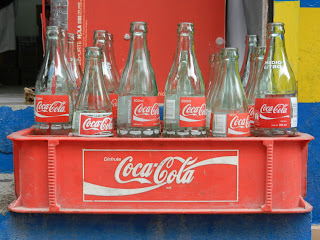 Something incredible has happened lately in Puerto Vallarta; NO SMOKE!!  Not the rule of no smoking, but finally, no burning of garbage.  The all too familiar smell of smoke as soon as you enter the jetway from your plane, has disappeared.  The new municipal government has put an end to that and I was informed that the new mayor (or Municipal President) fired many department heads, one being the Sanitation supervisor.  Main streets, especially in business and tourist areas are noticeably cleaner.  I also noticed a great deal of recycling trucks and new garbage trucks.  Much of the "streetscape" construction is completed including The Malecon which is now car free. Things are looking up.  Even bus stop signs with route numbers have been posted, although buses do not have route numbers!  Go figure. 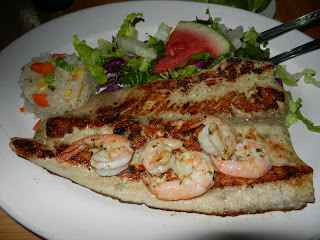 I finally had dinner at Mariscos el Coleguita in the Marina.  They're only open from about 2 in the afternoon until 7 or 8 and always packed!!  For what you get from the 15 or so items on the menu is VALUE PACKED..this was only 10.00us including one bottle of beer.  A bottle of a lesser brand of tequila is on the table with a shot glass, Kahlua and a grilled banana with a sauce is for dessert.  This was an almost 1 pound piece of grilled Dorado!  The service was very good as well as the conversation. 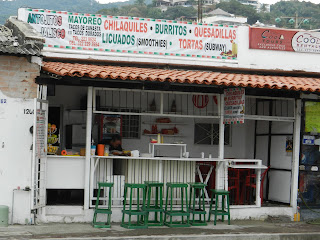 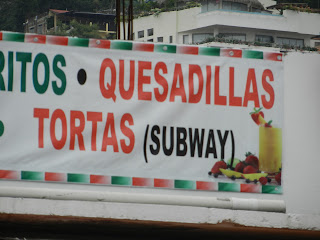 Located in downtown Vallarta is  this place.  After seeing the

Subway translation for "torta", it was my duty as a friendly American
to set the proprietor straight.  Translating through his daughter-in-law, I told him that what he makes and sells is MUCH better than what Subway has and he should really remove "subway" from his sign.  I told him in a way that Subway is
really nothing more than a lettuce

sandwich with very little meat of
any kind!  He got it.  The customer pictured here would not enjoy anything but a real TORTA.