Heat Seekers and the Food Network

Aaron Sanchez and Roger Mooking do this show on the Food Network entitled "Heat Seekers" in which they travel around the United States going to any and all places that serve up SPICY foods.  With that in mind, no trip of mine would not be complete unless I visited the same places, two of which were in HOT Las Vegas!

My first stop was Lindo Michoacan on Desert Inn, to order "Cry Today, Cry Tomorrow Chicken".  I couldn't remember the name but was anxious to try it as I was starving.  I started a conversation with the manager, telling I saw this place on TV and blah, blah.  He offered a a sample before I ordered telling me that it is very spicy and I might not want to order it.  I said to myself, "yeah right" as I was in the middle of consuming some very good smoky mezcal, chips and excellent bean dip and salsa.  He brought me a teaspoon size sample of a deep brown and dark reddish color concoction.  I took a little of the edge of a fork and the smell of it hit my senses as soon as I put it in my mouth, not even touching my tongue, I got a burn. Another tiny hit of this and I was on fire that was coming from the seven chiles, habenero being the least powerful!!  I tried to extinguish the flame with tortilla chips.  That didn't work.  Bean dip?  Nope.  I was dying at my table and my waiter disappeared!  I walked to the door of the kitchen and had to ask for milk as my nose was running and my hair must have been standing on end. THIS IS INSANE!!!  I had already ordered an appetizer of Gorditos de Camaron; a huge, tortilla stuffed with shrimp, tomatoes and onions, flash fried and covered in cheese.  It was massive for an appetizer.  With the fire dimming down in my stomach, I had lost my appetite.  I did manage to finish the appetizer but had to cancel an entree of what would have been delicious pork.
I'll have to go back again, but next time I'll have the Clark County Fire Department standing by.

My next stop was at Rice & Co. at the Luxor Hotel for their
Fire Breathing Dragon Roll.....

Now, Arron and Roger had trouble with this.  Was it for the camera or did they really have a problem with this?  I didn't. The Sushi Master prepared an outstanding roll consisting of
sliced habanero, spicy tuna, shrimp tempura, habanero powder, a drizzle of ghost pepper sauce and topped with micro cilantro.  The Master told me that crushed Pop Rocks (remember those?) were added for a sizzle effect, but I didn't notice since they must have already exploded before serving.  This was really good!  I made it through four of the eight pieces before requesting a small cup of milk.  The waitress brought half and half which was even better.  Do not be afraid to ask for milk.  The combination may sound disgusting, but it will kill a burn faster than beer. 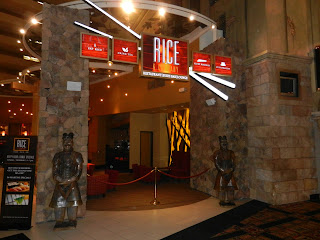 So I casually made it through eight pieces of this gift of the sea
and had to laugh at Aaron and Roger..C'mon!!  In fact, as I was leaving, the manager told me to hang out a minute.  He returned with a gift for me:  a boxed gift of 2 sets of Rice & Co.
chopsticks.  I thanked him, but was surprised.  Was this a challenge, no.  A competition?  No, I was there alone.  I was informed that a guy about the same size and age of me quit after one bite and another guy, the same thing!!!  Dare I call them pussies?!?!  Nah, just amateur's like me!
Posted by wicky at 12:32 AM No comments:

Finally returned to Las Vegas!  I can no longer be loyal to United Airlines (Continental) since the fares remain high and the airline doesn't seem to have as much fluctuation as before the merger.  With that, I am Southwest's newest customer. 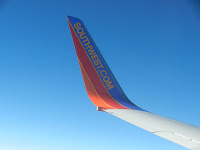 My second Southwest trip brought me to Las Vegas, via Phoenix....what a boring airport!  I no longer mind changing planes
as it gives me a chance to stretch my legs; I'm getting old!
Arrived in Las Vegas, picked up my car and off to the hotel.  Wow, it's already 101 degrees...but "it's a dry heat".  I wasn't really hungry yet as I ate at a faux-Mexican restaurant in Phoenix.

In Las Vegas, everything is first-class, whether it's Mcdonalds or
some pizza place.  My first dinner stop on Saturday evening was
a family owned Italian restaurant; Sicilian Cafe, way out on East Tropicana.  I was really in the mood for spaghetti and meatballs for some reason and found this place by hearing an ad on KJUL.  I heard this place has real, homemade style and taste so why not try it.  I was greeted at the door my Mimma, and after my eyes adjusted from bright sunlight to indoor lighting, I was greeted by scenes and smells of Sicily.  In keeping with the homemade theme, I consumed my spaghetti and homemade meatballs and homemade bread, but preceeded by a delicious bowl of pasta e fagiloi.  I left full. I was a little disappointed with the sauce as I think mine is better.  Should sauce be on the dry side?  I needed more for the spaghetti. 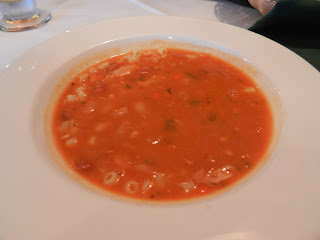 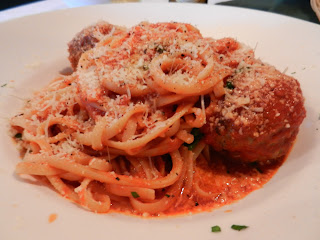 While my dinner kept me full until morning, I had to check out 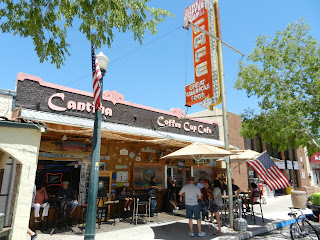 another Diners, Drive-ins and Dive place for breakfast.
I drove out about 23 miles to Boulder City, NV. This time, for a change, I was definitely
surprised and happy that The Coffee Cup Cafe was excellent!
I had to wait about 10 minutes for a seat at the counter as the place was very crowded at 10.30 in the morning.  The hostess suggested I order one of their excellent Bloody Mary's with BACON!!  I ordered one; a 16 ounce "hand crafted" Bloody Mary with bacon that is specially, again, "crafted" for the restaurant by a local purveyor.
A 16 ounce drink, combined with an outdoor temperature of 104 degrees, again, "a dry with an outdoor temperature of 104 degrees, again, "a dry heat" is not a great combination, but then again, I'm inside!  When seated, I ordered their famous Chile Verde omelet with hash browns and sourdough toast.

This was loaded with chunks and shredded pork with a nice kick of spices.  It's not to be missed!  Finally, Guy Fieri picked a winner!
Boulder City was originally built by the US Government to house construction workers during the construction of Hoover Dam.  It's also a stopping off point for Lake Meade visitors. 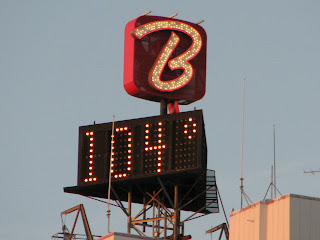 Tuesday afternoon, I had a reservation at the new Museum of Organized Crime and law Enforcement, commonly referred to as "The MOB Museum" which was the brainchild of  former 3 term Mayor and mob guy defense attorney, Oscar Goodman.  There is no MOB!  It's simply a group of business men...yeah, business
men, that's it...but they ran nice hotels and casinos.


The Museum, not to be confused with The Mob Attraction at the Tropicana, shows the beginnings of Las Vegas crime history from the "wild west days" to modern Las Vegas and mob infiltration, mob hotels and the notable figures that built the City in the middle to late 20th century.  It is a multi-media and educational journey to learn about all things mob and maybe some things you don't want to know.  Most importantly, the museum is located in the old US Post Office and Federal Courthouse in downtown to give an authentic judicial feel. There is a huge history to this building.  Leave the kids home, please.

Loosely translated, Las Vegas means indulgence and lots of it
whether it's buffets, alcohol or magnificent hotels.  Personally. I don't care for buffets, I'll do alcohol of course and ultra expensive hotels, I can do without.
After leaving the MOB Museum, I walked over to Main Street Station Hotel and Casino for dinner. The Triple 7 Micro-brewery located in the Hotel, brews excellent beer and has a very good, very reasonably priced menu.  This evening I had, what else, Steak!

As I left, I put two dollars in the slot machine and I hit for thirty six bucks.  That paid for dinner, plus a couple of more beers! 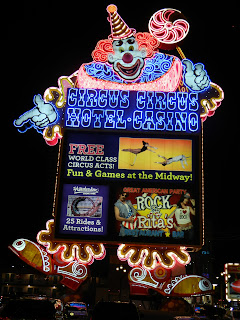 By far, the best steakhouse for the money, in my opinion is "THE Steakhouse" at Circus Circus.  Yes, Circus Circus is the budget property for MGM group of hotels, but that doesn't stop me or anyone else for going to this old school Vegas temple of meat!!  It is a special treat when I go here.  I have my own waiter, Felix, who has been here almost 20 years.  There is nothing better than a professional career waiter (or waitress).


A not very large menu is easy to negotiate. A cozy, quiet bar,  dark wood and red leather booths make this a very Vegas steakhouse just steps off the glitzy Strip outside.


After an entertaining afternoon at the MOB Attraction located at the renovated and beautiful Tropicana Hotel, I was able to try a 21 day, dry aged, bone in, rib eye.  While not a fan of rib eye, I'm partial to porterhouse, as noted above, it was very good none-the-less.  In the new, bright and modern restaurant, Biscayne Steak Sea and Wine, overlooking the fake beach just below, this was another relaxing dinner in casual bliss.  That means shorts and sandals...but NO t-shirts.

And thank you Las Vegas, see you again soon!!

After a nights stay at the popular Amish Lantern Motel (<<link)
a real '60's mom and pop Pennsylvania "motor lodge" breakfast was had at the adjoining JJ's Diner.
Hard working owner T. Jason Wheary does everything except actually milk the cows (there are no cows within 1/4 of a mile!)
I was happy to find real local Hatfield sausage, since I always see their trucks on the highways.  If you're in the area of the Strasburg Railroad, come here for breakfast, you won't be sorry.  You can also enjoy real(?) Pennsylvania Dutch sourdough bread, but don't tell people in San Francisco. 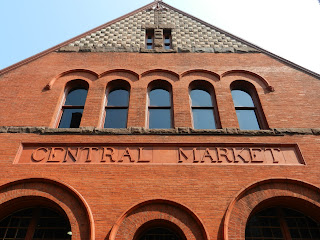 Memorial Day Weekend 2012 began with a fast train ride to Lancaster, Pennsylvania for a tour of the Central Market, which has been operating forever, though its original location was down the street.  An afternoon of sampling; like Costco, but actually paying for it!  The sample menu included a variety of
"international" fare including stuffed grape leaves, Cuban sandwich, local Lancaster meats and sausages and a variety of
local Amish and Menonite confections. Loca, real whole milk chocolate milk washed the candy down for a sky high sugar buzz. 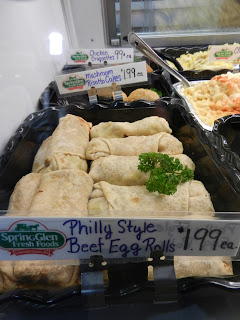 Next stop was Bube's Brewery in Mount Joy. Bube's in pronounced BOO-BEES and was not a forerunner to Hooter's.
Bube's has been around since the 19th century.
A selection of brews, served up by Ryan the bar keep and a nice menu served up by the best waitresses in Lancaster County keeps everyone smiling. The Catacombs keep the beer cool, which also their fine dining area.  This is a very interesting place which can be spooky.  It was featured on Syfy's Ghost Hunters.

Next door to Bube's is yet another historical building.  It's the old Central Hotel, now named Alois with it's ancient bar.