This time around I decided to fly on Delta through Atlanta to save over $150 dollars, rather non-stop on Continental/United.  For the extra hour in Atlanta and no check-in lines in Newark, it's worth it. 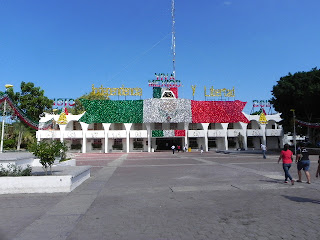 Due to the Mexican Independence Day holiday, I was unable to check into my timeshare on Saturday and decided to stay one night in downtown Cancun.  Downtown, or Centro, is far more "Mexican" than the Hotel Zone on the beachside of town, so the atmosphere is completely different.  I stayed overnight at Hotel Xbalamque (movie set review), a traditional old school downtown hotel.  You can read my review over on Tripadvisor.com.
Sunday morning for breakfast, I took a cab over to a very good, local place named Los Bisquets Obregon.  It's a small chain of diners, serving good traditonal and regional Mexican food.  "Bisquets" should not be missed while in Cancun.  Unfortunately, the pictures I took from my cell phone were lost.  Next time.
Tacos!  As in New Jersey and other states, there are always rivalries
between restaurant's and their fans. We have had Callahans and Hirams Hot Dogs, Philadelphia has Pat's Steaks and Geno's and so on. 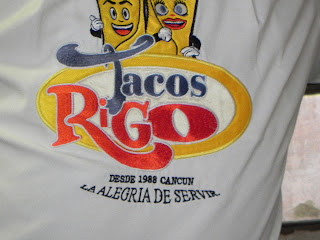 In Cancun, there is Tacos Rigo
and Poblanos.  Though not across the street from each other, they are the big deal in Cancun taco competition and each have a big following.  Rigo offers tripe and eyeballs.  MMMmmm, maybe to someone but not for me.  I'll stick to my tacos al pastor!

Tacos al pastor is made from layers of pork and beef on a large skewer, gyro style, spinning around a gas flame or charcoal fire depending on the region you're in.  The charcoal adds a rich flavor to the meat that the gas does not.  Both are still delicious with added onion and cilantro. Both offer a varitey of salsa and heat levels to choose from.  Add a Leon Beer and you're all set. 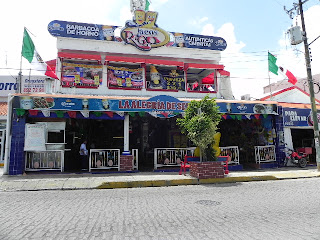 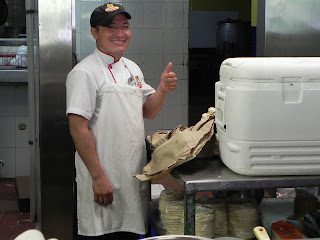 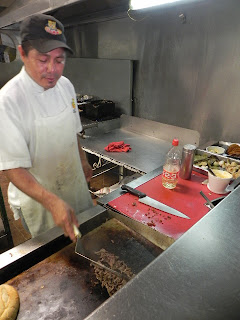