Rumble on the Reservation

"The Kewa Pueblo Station (previously Santo Domingo Pueblo) is located near the ancient Cerrillos turquoise mines and its people have an entrenched history of making fine jewelry and heishi out of the colorful stones. The Kewa people historically are great traders of their crafts, very much like their Mesa Verde and Chaco Canyon ancestors." .....Courtesy New Mexico Railrunner Express.
So I drive up I-25 to try to locate abandonded buildings that I saw from the Railrunner at the above mentioned location.
Once you exit I-25, you're on your own.  Fortunately, I have a good sense of direction and was able to locate the train station and buildings; just follow the new paved road to the end and you find these sights: 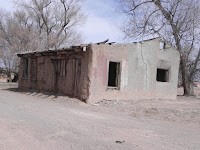 From today's Amtrak's Southwest Chief and the Santa Fe Super Chief of years ago, you would see this from the window of the train. 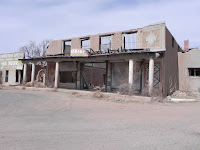 Now, photography is strictly prohibited on the Reservation, since you are on sacred land and you could get in all sorts of trouble, especially being a "pale face".  As I was taking these pictures, there was nobody around for miles.  A very large explosive and rumble sound came from the East.  Keeping in mind the US Air Force is always in the area, I thought perhaps a sonic boom, but it sounded different, but with the same effect:  a strong gust of wind came up right after the exlposion and continued for several minutes.  A higher power was watching me and was giving me a sign!!!  Get the hell away!!!  I got in my car and drove away only to see a Sandoval County Sheriff's Deputy passing me going to where I just was.