I live near a "large retail computer store".  Set up like a Barnes and Noble store, only selling computers, there is a coffee bar setup for customers waiting on repairs and consulting.

A misinformed local traffic reporter called it a "KEY- or-ek" coffee machine.  I'll call it "Kor-ech"!!!  It's a great idea for those who want a quick cup but at great expense.  The settings begin at  whopping 4  ounces. Really?  Who drinks a 4 ounce cup of coffee?!?! 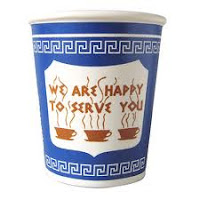 The increments are 4, 6, 8 and 10 BUT the larger the size, using the same K-Cup, the weaker the coffee is, unless you use 2 K-Cups or more to make one cup which can be very costly.  Anyway my choice of coffee was 8 ounces which resulted in a extremely weak cup of tasteless brown water; something a passing car would spray after a rain.  I report, you decide.
Posted by wicky at 12:34 PM